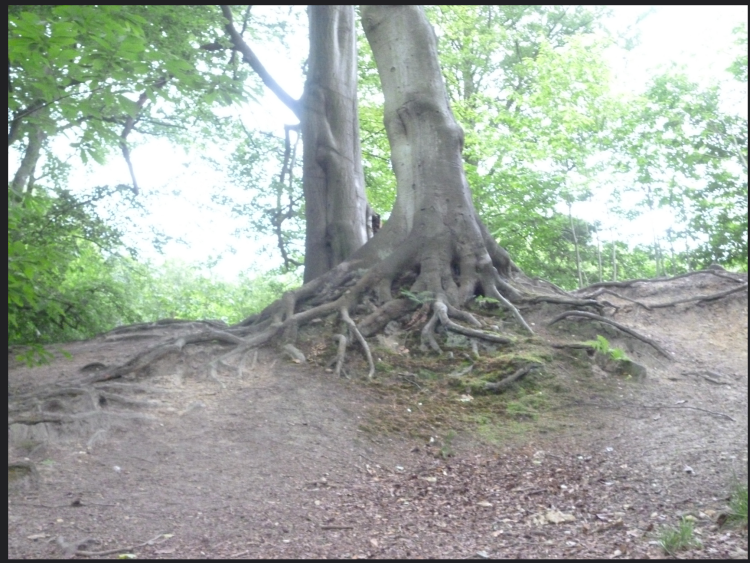 This is a translation of a recent post of mine on LinkedinPulse and on this blog. I had not much written in French lately.

Since the terrorist attacks, since I see in the press and elsewhere reports of the ‘jungle of Calais‘, I wonder, how did we get there? I feel we need to try to find answers because we cannot heal the disease without finding its cause.

Refugees are herded into squalid camps, a spell that we would not want for our cattle.

These desperate people come from the cradle of civilisation. From nations that fell into decline under the weight of political regimes favouring their personal interests, letting corruption and political repression reign the terror. Western powers, captivated by the black gold found their field shenanigans. The Shah of Iran, suffering from delusions of grandeur ended up being dismissed by those who held him as their puppet. Khomeini and the Islamic power rule since 1979, for over forty years of a regime that has brought this country to the Middle Ages. Iran of today is no longer the Persia, father the Cyrus Cylinder, of the original Declaration of Human Rights, kept at the British Museum. The wheel of destiny has turned.

Iraq, long supported by the West in its military attacks against Iran, became the enemy. And one day a President awakened from his sleep to the sound of a divine command ordering him to attack this country, once an ally. This man should be tried today for crimes against humanity.

I am doing a shortcut, just mentioning the Guantanamo prison, torture in the legal nomansland of the first world power.

Successive wars, torture and humiliation,  strengthened Islamist terrorist networks. On 9/11, we jumped to the next level of violence with the deadly attack of the Twin Towers in downtown New York. The response, strengthening of Western coalitions against the forces of evil in the guise of Islam. The 21st Century Religious war.

Just like a Battle Game – our governments must have been left to long to play virtual war. The arms industry rubs its hands. The major oil companies made their profits, the military could finally put their theoretical training in practice.

Honest citizens are made to believe that military attacks – based on lies now proven – had to overcome the evil by the force of good.

But the bombs, missiles, as sophisticated as they are, are not capable of the surgical destruction promised. Thousands of civilians are killed. Families disseminated, cultural heritage at large extents destroyed forever. Even  humanitarian hospitals fell under attacks. MSF medical centers were destroyed although they had shared their position. But how to avoid them? This war game is not proceeding as on the screen or on the board. It’s real blood flowing and the blood of innocent civilians. Hate is exacerbated, attacks of all kinds multiplied. A crescendo of violence whirlwind shall take all reason and humanity.

We are in a ‘State of War ‘, as likes to proclaim  the French Prime Minister, Manuel Valls. Although France is not overrun by enemy tanks. Radical Islam has hit the heart of Paris. Security measures are tightened. The state of emergency is declared, then extended for the first time under the Fifth Republic. Individual freedom gets limited. Searches and spot checks will follow. Racial profiling and Islamophobia seriously increased. Yet nothing can stop the attacks; after Paris, Mali and Brussels. On the other side of the Channel, the attack on the San Bernardino killed 41 innocent people.

The Government debated to strip French nationality to terrorists, until they realise that this would create stateless individuals no-one  would know what to do with. In the rush it is decided to limit the sanction to bi-nationals, at the risk of creating two tears of French citizens. The decision has an immediate effect  : the resignation of the Justice Minister, Christiane Taubira, who refused to play this demagogic game, in the country of Human Rights. UPDATE : Hollande drops plans to strip nationality.

But lets think, for one second, can we really believe that the menace of withdrawing French nationality would have any deterrent effect to a religious fanatic, kamikaze, ready to explode himself ? Irresponsible demagogy!

If instead, we looked at the reason behind, the motive of a French national – because they are indeed first or second generation French Citizens – to become entrapped by the enemy who kills in the name of the Islam, even though many are not even practicing muslims. In fact, all those arrested or unmasked terrorists have a common denominator:  the passage by the prison. In real life, it’s not like in the Monopoly game, prisoners don’t often get a second chance.

Because I have been fortunate to have studied Criminal Law taught by the Professor Léauté, I know from many years, what he kept warning, the danger of overpopulated prisons. It has only worsened from year to year. This problem is not confined to France – regularly condemned by the European Court of Human Rights for his conditions of detention of prisoners – the problem is unfortunately common to most Western countries. England has privatised its prisons. This is a tragedy. The BBC program, Panorama, recently revealed the violence suffered by very young prisoners, humiliated and beaten by prison guards. For far too long, engorged prisons have ceased to fill their redemption feature. It has become the place of further training in crime and regimentation of religious extremists. We cannot continue to deny the problem, pushing the dust under the carpet. The prison situation is explosive. The work of the guards has become untenable. This does not prevent our presidential candidate, Nathalie Koziko-Morizet to proclaim life sentence for terrorists, why not return to the death penalty. Lets be serious. Did she bother to ask prison guards on the difficulties of managing inmates sentenced to life?

Do not get me wrong, I don’t defend these terrorists but it is worth remembering that France was liberated by the action of a notorious terrorist, the General De Gaulle, and his network. The question is not so simple. I recommend everyone to read or reread ‘The Just Assassins‘ by Albert Camus.

The case of the brothers Coulibali is very eloquent on the motivation of some of these terrorists. These are young people from disadvantaged suburbs, delinquency, prison, cut off from everything, without being heard. Have you ever strolled in Paris with a swarthy? A very revealing experience of racial profiling. When you are systematically controlled, when you cannot find housing, nor work, except in your ghetto, you become an easy prey. Brainwashed and when there is no more hope, terrorist attack, at the cost of owns life, await them. The Coulibali brothers had produced a video with a hidden camera on the conditions of detention in prison but had not been heard.

So what should we do? First, lets stop talking ‘State of War’ and ‘State of Emergency’. No, France is not at war, as Belgium has not declared war either. State of war would mean that terrorists may seek protection of prisoners of war and applicable rules of international law in time of war. Lets start by finding ways of integrating refugees. Infiltrate Islamist circles. This is how Salah Abdeslam was arrested and not as a result of police surveillance. We now know that these terrorists were spotted by the French services, Belgian, Turkish or American. That did not stop them to act. We must accept that accumulating a mass of information is counter productive. The Passenger Name Records data base will not bring much. Any database inherently increases the risk of unauthorised access. Instead, France needs to increase its witness protection.

In the longer term, improving the education system because our youth are our only hope and because it is through the school that immigrants get integrated. We need to review the prison system. It is essential to find alternatives to imprisonment such as Community Work. These young people can no longer understand why politicians and big industry leaders never go to prison despite their wrongdoing. How many ministers were caught red-handed and still at large?

Our judicial system is on the brink of bankruptcy. A society that no longer believes in its Justice is a very sick society.

The terrorists have made us a gigantic walk-to-nose by attacking Brussels’ international airport – one of the most watched places – and the metro station close to the European Institutions, only a few meters from Molembeek. The picture of the three terrorists, walking side by side, wearing one black glove, that took a taxi to arrive at the airport, should be sufficient proof that no security system can confront determining suicide bombers ready to blow. These police measures and increased surveillance will exacerbate violence. The real terror is the fear that is created. We are losing the fundamental values ​​of freedom on which our society is based. We need not let the terrorists take away our identity.

Looking at the biography of the Ministers, some are immigrants. I wonder, how they have managed to succeed what these young terrorists have missed ? Education.

It started with a discussion on Facebook on the social origins of Madame Najat Vallaud-Belkacem, born in 1977 in Beni Chiker in Morocco, in a very modest family. Second of seven children. The family joined the father in France for family reunification. A father working in the building industry, a girl who did all duty at state schools. She did brilliant law studies and finished Science Po to be the first woman Minister of Education, at the age of 36 years. His first Tweet after her appointment was a thank you for this school that allowed her to access a cabinet position. She is not the only bi-national in this Manuel Valls government, starting by himself, a Hispano-French; Ms. Myriam El Khomeri, Minister of Employment, was born of Moroccan father and a French mother; Fleur Pellerin, former minister of culture, as the ecologist Minister Jean-Vincent Place, were both born in South Korea, adopted by French families. The Mayor of Paris, Anne Hidalgo, also Spanish, has acquired French nationality in 1973. This is not even specific to socialists. In the right, Nicolas Sarkozy, sun of Hungarian and Madame Rachida Dati, mostly known for her Louboutin high heel shoes, is the daughter of M’Barek Dati, arrived Moroccan bricklayer in France in 1963 and an Algerian mother. His case is exemplary, she did not achieve her academic credentials without pitfall like the others, but starting with small jobs, not without difficulty, she ended at the ENM (Ecole Normale de la Magistrature) and was appointed Minister of Justice by Nicolas Sarkozy.

All this must be put to the credit of France. A society that, despite her caste, allowed the social ascent of children of immigrants. Instead of rejecting newcomers, look at how to integrate them positively. Let’s look at all these immigrants who are the pride of our country. Remember that lies under the Pantheon flame, Marie Curie, a Polish immigrant, to whom we would not give this tribute had she not been one day admitted to France. We drink the wine that originally comes from Persia, We listen to the music of Chopin, we practice algebra so let us love one another because we are born of the diversity that is enrichment.

Because welcoming immigrants remains above all a humanitarian duty.

This work is licensed under a Creative Commons Attribution 4.0 International License.

One thought on “Welcoming Human Beings Remains a Duty”

This site uses Akismet to reduce spam. Learn how your comment data is processed.